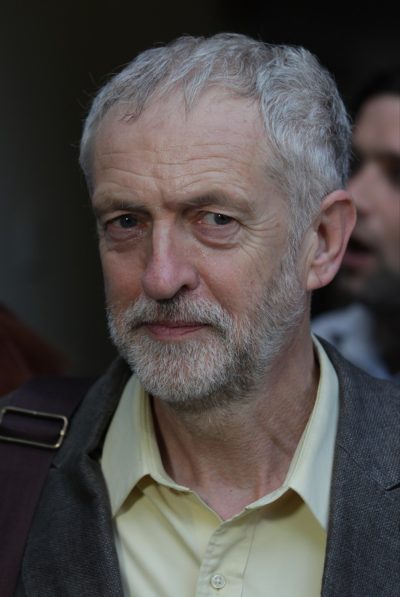 Corbyn in 2015, photo by Simonsnap/Bigstock.com

Jeremy is the son of Naomi Loveday (Josling) and David Benjamin Corbyn. His brother, Piers Corbyn, is a weather forecaster.

Jeremy is married to Mexican-born lawyer and businessperson Laura Álvarez. He has three children with his former wife, Chilean-born Claudia Bracchitta.

Jeremy’s paternal grandfather was Benjamin Corbyn (the son of William Arthur Corbyn and Louisa Matilda Smith). Benjamin was born in Lowestoft, Suffolk. William was the son of George Corbyn and Anne Chipperfield. Louisa was the daughter of James Smith and Mary A. Whiting.

Jeremy’s paternal grandmother was Dorothy Mary Bush (the daughter of Robert Bush and Louisa Woods Thistle). Dorothy was born in New Southgate. Robert was the son of Elizabeth. Louisa was the daughter of Thomas Thistle and Sarah.

Jeremy has stated that he has some distant Jewish ancestry. However, genealogical research could find no Jewish heritage in Jeremy’s family tree.