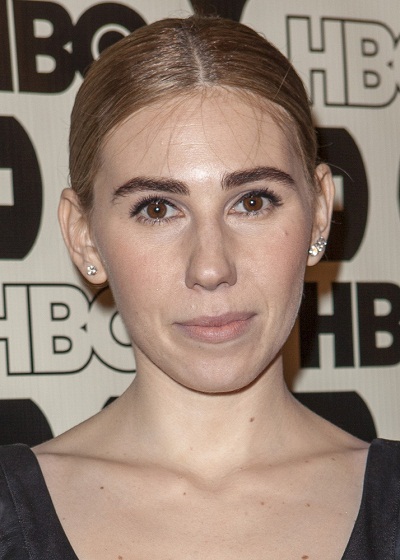 Zosia Mamet is an American actress and musician. She is the daughter of playwright and writer David Mamet and actress Lindsay Crouse. Her half-sister is actress Clara Mamet. Her stepmother is actress Rebecca Pidgeon. Zosia is married to actor Evan Jonigkeit.

Her father is Ashkenazi Jewish. His family was from Russia, Belarus, and Poland. Her mother has English, Scots-Irish/Northern Irish, German, and Welsh ancestry.

Zosia’s paternal grandfather was Bernard Morris Mamet (the son of Edmund/Edmond Nathan Mamet and Clara Palast). Bernard was born in Illinois. Edmund was born in Russia and/or Poland, the son of Ahba Mamet and Brocha Weiser. Clara was born in Poland.

Zosia’s maternal grandfather was Russel Crouse, a playwright and librettist (the son of Hiram Powers Crouse and Sarah Schumacher). Russel was born in Ohio. Hiram was the son of The Rev. Elijah B. Crouse and Elvina E. Schock. Sarah was the daughter of Jacob Shumaker and Judith Falk.

Zosia’s maternal grandmother was Anna Erskine (the daughter of John Erskine, an author and educator, and of Pauline Ives). Anna was born in New York. John was the son of James Morrison Erskine and Eliza Jane Hollingsworth, who was born in Castlewellan, Down, Northern Ireland. Pauline was the daughter of Theodore Milton Ives and Anna Welles Kellogg.