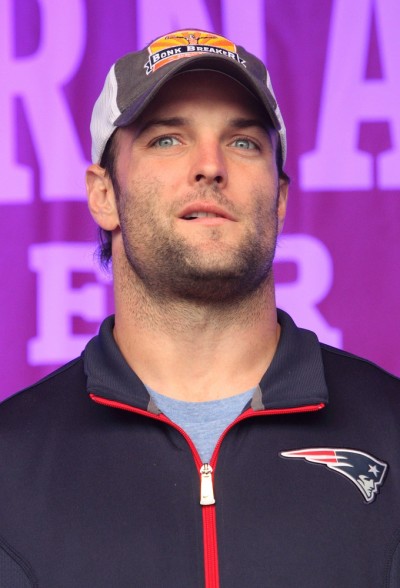 Welker in 2012, photo by Prphotos.com

Wes Welker is an American professional football player and coach. He was a wide receiver in the National Football League (NFL), and has played for the Miami Dolphins, New England Patriots, Denver Broncos, and St. Louis Rams.

He is the son of Shelley and Leland Welker. Wes is a member of the Cherokee Nation. His grandmother lives within Cherokee Nation jurisdiction in Sequoyah County, Oklahoma.

Wes is married to Anna Burns, a swimsuit model who won the 2005 Miss Hooters Pageant. The couple has three children.

Wes’s paternal grandfather was Calvin Jack Welker (the son of Clarence Jack Welker and Edith Eudora Norris). Calvin was born in Missouri. Clarence was the son of John Welker and Caroline. Edith was the daughter of Henry Osborn Norris and Martha Jane Lankford.

Wes’s maternal grandfather was William Clifford/Frank Wetzel (the son of Clifford Wetzel and Cora Leola Lessert). William was born in Oklahoma. Wes’s great-grandfather Clifford was the son of George Pendleton Wetzel and Floy Odessa Snyder. Cora was the daughter of Frank Lessert, whose father was of one quarter Osage Native American descent, and whose mother was of half Kaw Native American descent; and of Cora Leola/Leota McKenzie.