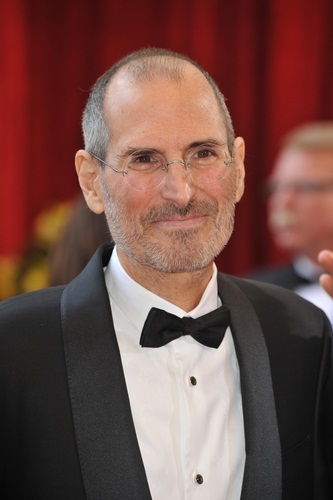 Steve Jobs (Steven Paul Jobs) was an American businessperson and inventor. He was the co-founder, chairman, and chief executive officer (CEO) of Apple Inc., among his involvement in many other important companies and technologies.

Steve was adopted by a California couple, Clara (Hagopian) and Paul Reinhold Jobs. Paul was of German descent, and was the son of Edwin A. Jobs and Clara B. Clara Hagopian was of Armenian ancestry, and was the daughter of Louis Hagopian and Victoria Artinian.

Steve had a daughter with his former partner Chrisann Brennan, and three children with his wife, businessperson Laurene Powell Jobs. Steve’s sister Mona was married to writer and producer Richard Appel.

Steve passed away on October 5, 2011, at the age of 56. He will be remembered for the technological innovations he contributed to the world.

Steve’s biological maternal grandfather was Arthur Casper Anthony Schieble (the son of Kaspar/Casper Schieble and Anna Maria Acker). Arthur was born in Wisconsin. Kaspar was born in Baden, Aargau, Switzerland, the son of Franz Joseph Schieble and Anna Maria Haus, and was of Swiss-German descent. Anna Acker was born in Wisconsin, to Swiss parents, Johannes/John Acker and Brigitta/Bridget Binz, from Baden, Aargau, Switzerland, and was of Swiss-German descent.

Genealogy of Steve Jobs (focusing on his adoptive parents) – http://www.findagrave.com

Genealogy of Steve Jobs (focusing on his adoptive father) – http://www.wikitree.com