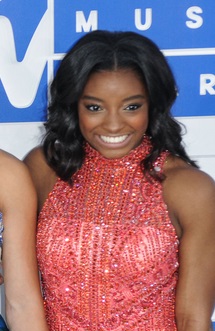 Simone Biles is an American artistic gymnast. She has earned a combined 32 Olympic and World Championship medals, and is tied as the most decorated gymnast of all time. She is considered one of the greatest and most dominant gymnasts.

Simone is the daughter of Shanon Biles and Kelvin Clemons. Her mother was unable to ook after Simone and her siblings due to her drug and alcohol addiction, and Simone’s father left the family early in Simone’s life. Simone has three siblings, and along with them spent time in foster care.

In 2003, Simone was adopted and raised by her grandfather, Ronald George Biles, and by Ronald’s wife, Simone’s step-grandmother Nellie Cayetano Biles, who was born in Belize. The family lived in Spring, Texas. Simone has Belizean citizenship through her adoptive mother.

Her parents are both African-American.