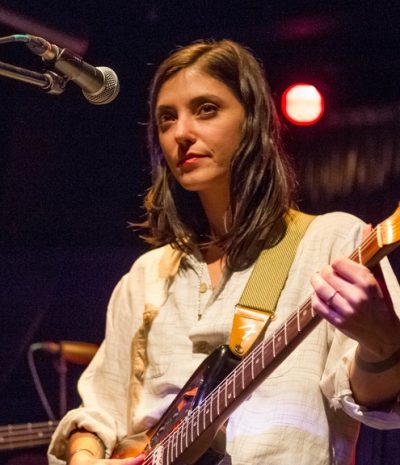 Sharon Van Etten is an American singer, songwriter, and actress.

She has a son with her partner Zeke Hutchins, who has been her drummer and manager.

Sharon’s paternal grandfather was James Paul Van Etten (the son of Roy William VanEtten/Van Etten and Sarah Alice Maher). James was born in Perry, New York. Roy was the son of William Peter Van Etten, whose father was of mostly Dutch descent, along with distant Spanish, from Castilla y León; and of Emona/Emma Gene Balcom, who had English ancestry. He had deep roots in the U.S. Sarah was the daughter of James P. Maher, who was Irish, and of Alice McKinley, the daughter of Catholic emigrants from County Armagh, Northern Ireland.

Sharon’s paternal grandmother was Mary Grace Lavelle (the daughter of Patrick James Lavelle and Mary Margaret McHale). Sharon’s grandmother Mary was born in Scranton, Lackawanna, Pennsylvania. Patrick was the son of James Patrick Lavelle, who was born in Liverpool, England, to Irish parents, from County Mayo; and of Bridget A. Clark, who was born in Pennsylvania, to Irish parents, also from County Mayo. Sharon’s great-grandmother Mary Margaret was the daughter of John E. McHale and Ellen Victoria Dougherty, who were also the children of Irish parents.

Sharon’s maternal grandfather was Stanley Joseph Gawelko (the son of Dominic/Dominik Gawelko and Anna Okrasinski/Okrasinska). Stanley was born in Illinois, to Polish parents. Dominik was born in Krypno, the son of Bernard Gawelko and Alexandra. Anna was born in Czechowizna, the daughter of Alexander Okrasinski and Marianna Snarski.

Sharon’s maternal grandmother was Florence Katherine Olson (the daughter of Albert Olson and Gerda Carlson). Albert was born in Bohusland, Sweden, the son of Olaf Anderson and Eva. Gerda was born in Michigan, to Swedish parents, John A. Carlson and Hilma Marie Pettersson.