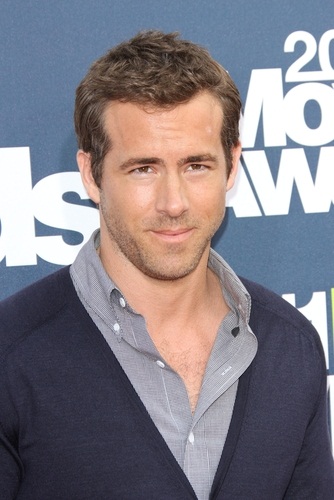 Reynolds in 2011, photo by s_bukley / Shutterstock.com

Ryan Reynolds is a Canadian actor and film producer. He is known for his roles in the films National Lampoon’s Van Wilder, The Amityville Horror, Waiting…, Green Lantern, Definitely, Maybe; Adventureland, and The Proposal, and for playing Wade Wilson/Deadpool across all media.

Ryan was selected People Magazine’s “Sexiest Man Alive” in 2010. He is thus far the only Canadian-born man to have been given this title by the magazine.

Ryan is the son of Tamara Lee and and James Chester Reynolds. He was raised Catholic. His ancestry is Irish (over three eighths), Scottish, Northern Irish, one eighth Luxembourgish, English, Cornish, 1/32 Dutch, and 1/32 German. The Luxembourgers are a Germanic ethnic group.

Ryan is married to American actress Blake Lively, with whom he has three children.

Ryan’s paternal grandfather was Chester Ambrose “Ches” Reynolds (the son of William Francis Reynolds and Elizabeth Frances Crowe). Chester was born in Chicago, Illinois, U.S. He was a politician, and member of the Social Credit Party of Alberta, who was a Member of the Legislative Assembly of Alberta, from 1940 to 1944. William was born in Peterborough, Ontario, Canada, the son of George Edward Reynolds, who was born in Belturbet, Cavan, Cavan, Ireland, and of Sarah Nesbit Coad, who was Irish. Ryan’s great-grandmother Elizabeth was born in New Orleans, Louisiana, U.S., to Irish parents, with her father’s name being John Crowe, and her mother’s name possibly being Margaret McEnerny.

Ryan’s paternal grandmother was Helen Mary Long (the daughter of Thomas Charles Long and Katherine/Catherine/Catharine Cecelia/Cecilia “Kate” George). Helen was born in Kansas, U.S., to a father from Huron County, Ontario, Canada and a mother from Kansas. Ryan’s great-grandfather Thomas was the son of Thomas Charles Long, who was born in Inchigeelagh, County Cork, Ireland, and of Elizabeth Ann “Elisa”/Eliza Foley/Kavanaugh, whose parents were from County Wexford, Ireland. Ryan’s great-grandmother Katherine was the daughter of parents of Luxembourger origin, Nicholas Amos George and Johanna/Joanna Jane George. Ryan’s Luxembourger ancestors had lived in Attert, in the province Luxembourg, Wallonia, Belgium, as well as in the country Luxembourg.

Ryan’s maternal grandfather was Dr. Neil Alexander Stewart (the son of Alexander Maclean/Mclean Stewart and Edith Annie/Ann Lyon). Ryan’s grandfather Neil was born in Calgary, Alberta, and was of Scottish and Northern Irish descent. Ryan’s great-grandfather Alexander was the son of William Stewart and Agnes Mclean, who were Scottish, with William having been from Moral, Comrie, Perthshire. Ryan’s great-grandmother Edith was the daughter of Robinson Ernest Lyon, whose father was from Inverurie, Aberdeenshire, Scotland, and of Sarah Marion/Maria Maxwell, whose parents were from Ireland, and were likely Protestant.

Ryan’s maternal grandmother was Verna Margaret “Peggy” Vandervoort/Van der Vert (the daughter of Earnest/Ernest Stanley Vandervoort and Emma Margaret Smith). Ryan’s grandmother Peggy was born in Vancouver, British Columbia. Her ancestry was a combination of Irish, English, Scottish, and Dutch, as well as Cornish and German. Earnest was the son of William Earnest Vandervoort, whose father was of Dutch descent, and of Elizabeth Woodhouse Wicher/Wicker/Witcher, who had English, Cornish, and Irish ancestry. Emma was born in Toronto, Ontario, the daughter of John Smith and Adeline Nixon, and had Irish, German, and English ancestry.

Genealogy of Ryan Reynolds (focusing on his father’s side) – http://laurenandtristan.net

Genealogy of Ryan’s maternal grandfather, Dr. Neil Alexander Stewart (focusing on his own mother’s side) – https://www.geni.com

Genealogy of Ryan’s maternal great-great-grandfather, William Earnest Vandervoort (focusing on his own father’s side) – https://wc.rootsweb.com