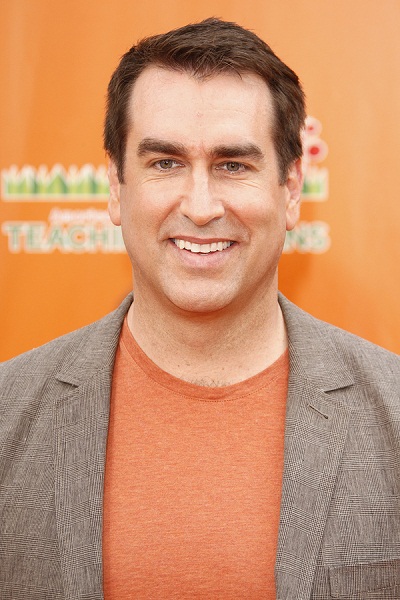 Riggle in 2012, image via Joe Seer/Bigstock.com

Rob Riggle is an American actor, comedian, and retired United States Marine Corps Reserve officer. He has attained the rank of lieutenant colonel. His roles include The Daily Show, Saturday Night Live, The Hangover, Modern Family, 21 Jump Street, Let’s Be Cops, Middle School: The Worst Years of My Life, Midnight Sun, and Dumb and Dumber To. He co-hosts game show Holey Moley.

Rob is the son of Sandra and Robert Riggle. He is married to Tiffany, with whom he has two children.

Rob’s paternal grandfather was Caleb Glenn Riggle (the son of Elmer E. Riggle and Ruth Priscella Kearney). Caleb was born in Iowa. Elmer was the son of Enoch Riggle and Louisa A. Woodrum. Ruth was the daughter of Caleb Kerney and Mary Elizabeth Ford.

Rob’s maternal grandmother was Helen Forrest/Virginia Reavis (the daughter of Edwin Forrest Reavis and Augusta Melvina Jones). Helen was born in Missouri. Edwin was the son of Henry Joseph Reavis and Lucy Ann Gentry. Augusta was the daughter of Gilbert Franklin Jones and Nancy Melcina Apperson.

Genealogy of Rob Riggle (focusing on his mother’s side) – http://worldconnect.rootsweb.ancestry.com