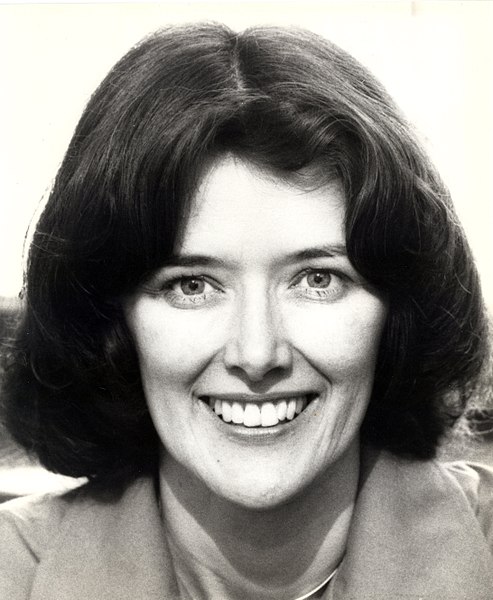 official photo of Pat Schroeder, from the Collection of the U.S. House of Representatives

She was a candidate for the Democratic Party’s nomination for President of the United States in 1988.

Pat is the daughter of Bernice Lemoin (Scott), a teacher, and Lee Combs Scott, a pilot and aviation insurance company owner. Her parents were born in Nebraska. She is married to Jim Schroeder, with whom she has two children.

Pat’s paternal grandfather was Frank H. Scott (the son of Robert McIntyre Scott and Rebecca Tinney). Frank was born in Pennsylvania, to Northern Irish parents. Robert was born in Londonderry, Donegal, the son of William David Scott and Sarah McIntyre.

Pat’s paternal grandmother was Clara May Combs (the daughter of Alonzo Leonidas Combs and Sarah Bunker Huntington). Clara was born in Nebraska. Alonzo was the son of William D. Combs and Mary Jane McGrew. Sarah was the daughter of Steven Ault Huntington and Clarissa Lovejoy Baldwin.

Pat’s maternal grandfather was Humphrey Clyde Scott (the son of William Crawford Scott and Louisa Frances Davis). Humphrey was born in Iowa. William was the son of David Irwin/Erwin Scott and Eleanor/Ellen Malone. Louisa was the daughter of Richard M. Davis and Nancy A. Foutz.

Pat’s maternal grandmother was Nellie/Nelle Eugenia Webster (the daughter of Abraham/Abram Wheeler Webster and Rachel A. Young). Nelle was born in Indiana. Abraham was the son of Thomas Corbin Webster and Nancy Dowers. Rachel was the daughter of Amaziah Young and Mary Beebe.

Sources: Genealogy of Pat Schroeder (focusing on her father’s side) – https://www.ancestry.ca