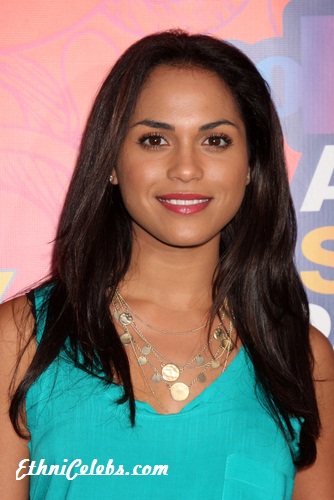 Monica Raymund is an American actress. She is known for her role as Ria Torres on the show Lie to Me.

Monica is the daughter of Sonia, who co-founded the Soulful Arts Dance Academy in St. Petersburg, and Steve Raymund, the retired CEO of Tech Data Corp., a distributor of computer components and software.

Her father, who is caucasian and from California, is of half English (from his own father) and half Ashkenazi Jewish (from his own mother) ancestry. Her mother is from the Dominican Republic. Monica was raised Jewish and had a Bat Mitzvah ceremony.

My father is white & Jewish. My mother is brown & Dominican. I’m proud of my heritage on both sides. Their love inspired me. #UnityMovement

Monica’s paternal grandfather was Edward Charles Raymund (the son of William Bernard Raymond and Vera Pauline Maxson). Edward was born in California, and was a philanthropist and businessperson, who founded the family company Tech Data Corp., a multi-billion dollar corporation. Edward had English ancestry. William was the son of William Bernard Raymond and Ruby Z. Downs. Vera was the daughter of Charles Fremont Maxson and Mary Pearl Smith.

Monica’s paternal grandmother was Annette Leah Davidson (the daughter of Morris Davidson and Myrtle Spector). Annette was born in New York, to a Lithuanian Jewish father, from Vilnius County, and a Russian Jewish mother. Myrtle was the daughter of Abraham Spector, from Kiev, and of Ida.

Genealogy of Monica Raymund (focusing on her father’s side) – https://www.geni.com