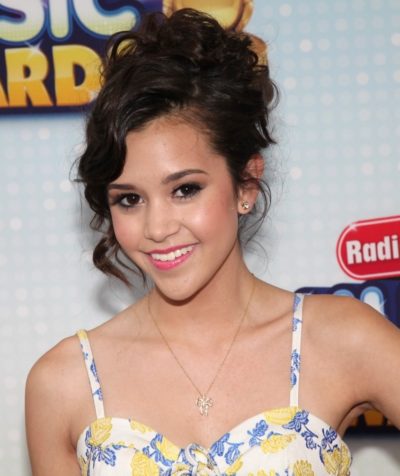 Megan Nicole is an American singer, songwriter, actress, and model.

She is the daughter of Tammy and Frankie Flores. She has a sister, Maddie. They were raised in Katy, Texas.

My dad’s family is originally from Mexico, but now three generations born in Texas. My mom is a mix of German and Native American. The Latin culture played a much larger role in our lives growing up, especially growing up in Houston. Anytime the family is together, even just my immediate family, there will be homemade Mexican food. Usually, we leave most of the cooking up to my dad, but I help make the tortillas from scratch, guacamole, and salsa.

It is not clear if Megan’s maternal Native American has been verified/documented.

Megan’s maternal grandfather was James Edward Boyd (the son of Franklin James Boyd and Mary Marie Dramer/Draemer). Franklin was the son of George W. Boyd and Annie Belinda Hewer, who was born in Texas, to English parents. Mary Marie was the daughter of Rudolph Draemer and Mary Behrend.

Megan’s maternal grandmother was Belva Sue Harvey (the daughter of Beauford Littleton Harvey and Bertha Hamlin). Beauford was the son of Skillern K. Harvey and Lydia Belle Sowell. Bertha was the daughter of Walter Austin Hamlin and Maggie Emma Crowson.