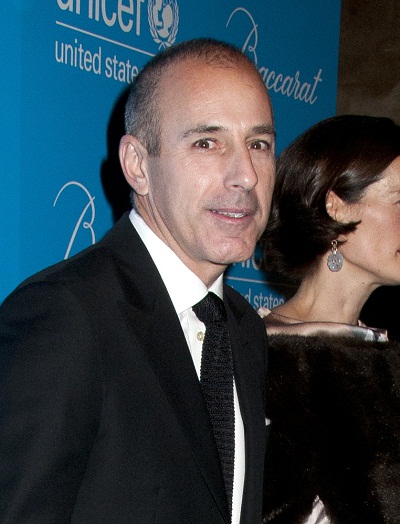 Matt Lauer is an American television personality and journalist. He was the co-host of The Today Show from 1997 to 2017.

His father was Jewish (from a family that emigrated from Romania and Poland). His mother was of English, as well as Scottish, Northern Irish/Scots-Irish, German, and Dutch ancestry.

Matt is married to model Annette Roque, with whom he has three children.

Matt’s paternal grandfather was Max/Emanuel/Matthew Jonas Lauer (the son of Israel Laurer and Sophia/Sallie Herțanu). Matthew was a Jewish emigrant, from Dorohoi, Dorohoi, Botoșani County, Romania. Israel was the son of Joseph Lauer and Sima Gropper. Sophia was the daughter of Șloim/Slomo Herțanu/Hartanu and Miriam Perla Vitner.

Matt’s paternal grandmother was Rebecca/Betty Sargoy (the daughter of Michael Sargoy and Ida Herman). Rebecca was born in New York, to Polish Jewish parents. Michael was the son of Morris Sargoy and Gittel Wolfson. Ida was the daughter of Israel Herman and Jennie Oginz.

Genealogy of Matt Lauer (focusing on his mother’s side) – https://www.geni.com