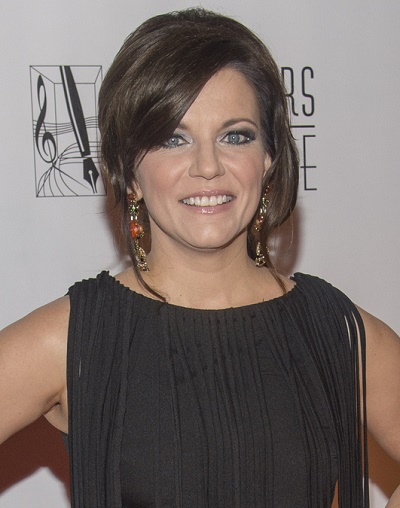 Martina is the daughter of Verla Jeanne (Delano) and Daryl Martin Schiff. Martina is married to sound engineer John McBride, with whom she has three children.

Martina’s paternal grandfather was Kenneth Lawrence Schiff (the son of William Carl Schiff and Marie/Mary Reinke). Kenneth was born in Kansas, and all of his grandparents were German.

Martina’s paternal grandmother was Maxine Phyllis Martin (the daughter of Clarence Martin and Maude Ella Talbott). Maxine was born in Kansas. Maude was the daughter of Benjamin F. Talbott and Celinda.

Martina’s maternal grandmother was Juanita Hazel Dodd (the daughter of Harvey Thomas Dodd and Nora Elota Mott). Juanita was born in Oklahoma. Harvey was the son of Andrew Jackson Dodd and Hannah A. Parker. Nora was the daughter of Edward E. Mott and Dedemonia.

Martina’s father on the 1940 US census – https://familysearch.org

Genealogy of Martina McBride (focusing on her mother’s side) – https://www.genealogy.com