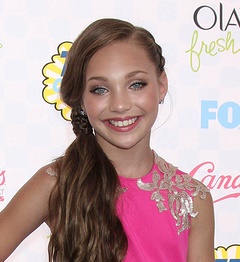 Ziegler in 2014, photo by kathclick/Bigstock.com

Maddie Ziegler is an American dancer, actress, and model. She is the daughter of Kurt Zeigler and Melissa Sulo. Her sister is dancer, singer, and actress Mackenzie Ziegler.

Maddie’s paternal grandfather was James A. Ziegler (the son of John Stuart Ziegler and Elizabeth Gertrude Fischer). James was born in Pennsylvania. John was the son of John Joseph Ziegler and Celia/Cecelia M. Stewart/Stuart. Elizabeth was the daughter of John Jacob Fischer, whose mother was German, and of Margaret Anna Sauer.

Genealogy of Maddie Ziegler (focusing on her father’s side) – https://www.geni.com