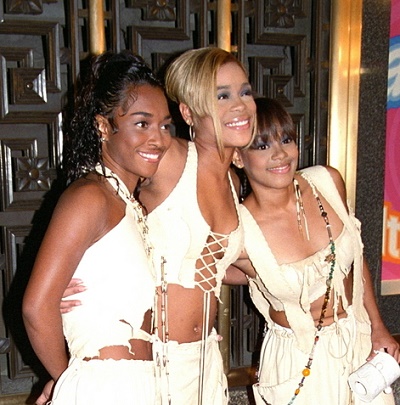 Lisa Lopes (right) with Rozonda Thomas and Tionne Watkins in 1995, photo by Prphotos

Lisa Lopes, known by her stage name Left Eye, was an American hip hop singer, rapper, songwriter, and producer. She was a member of the R&B/hip hop girl-group TLC, with Rozonda Thomas (Chilli) and Tionne Watkins. The group was created by Perri “Pebbles” Reid.

Lisa was the daughter of Wanda Denise (Andino) Coleman and Ronald Eugene Lopes. She had African-Cape Verdean, African-American, and Mexican ancestry. Most of the population (about 71%) of Cape Verde is a mix of Sub-Saharan African and European, usually from Portugal and Spain. Lisa’s surname, Lopes, is Portuguese, though she may not have had Portuguese ancestry.

Lisa’s paternal grandfather was Charles “Charlie” Lopes (the son of Emanuel/Manuel Lopes and Almira/Alma/Annie Smith). Charles was born in North Carolina. Emanuel was likely born in Cape Verde, and was the son of Charlie Lopes and Lenora. Almira was the daughter of Robert Smith and Hattie Taylor.

Lisa’s maternal grandfather was named Jose A. Andino (the son of Jose Andino). Lisa’s sister has stated that their grandfather Jose was of Mexican descent.

Lisa and her bandmate Tionne Watkins were cousins through marriage. Lisa’s mother was married to Tionne’s uncle.