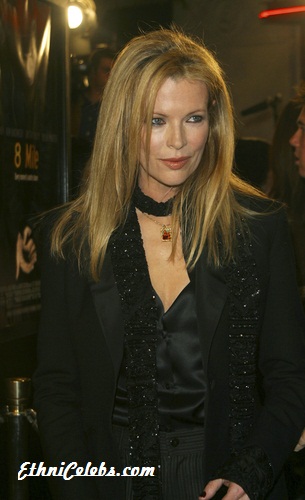 Ethnicity: English, as well as some German, Scottish, Scots-Irish/Northern Irish, and distant French

Kim Basinger is an Academy Award-winning American actress, fashion model, and singer. She won the Academy Award for Best Supporting Actress for L.A. Confidential (1997). She has a daughter, model and actress Ireland Baldwin, with her former husband, actor Alec Baldwin.

Kim is the daugher of Ann Lee (Cordell) and Donald Wade Basinger. Much of Kim’s ancestry is English, and she also has some Scottish and Scots-Irish/Northern Irish, as well as distant French, roots. Her surname, Basinger, is usually of German origin.

Kim’s paternal grandmother was Jessie Belle/Jessiebelle Ashley (the daughter of Clarence Allen Ashley and Carrie May Ellis). Jessie was born in South Carolina. Clarence was the son of Jesse Thomas Ashley and Milly Catharine Abel. Carrie was the daughter of Richard Archibald Ellis and Mary Matildia “Mamie” Pressy. Genealogy of Kim Basinger (focusing on her father’s side) – http://worldconnect.rootsweb.ancestry.com