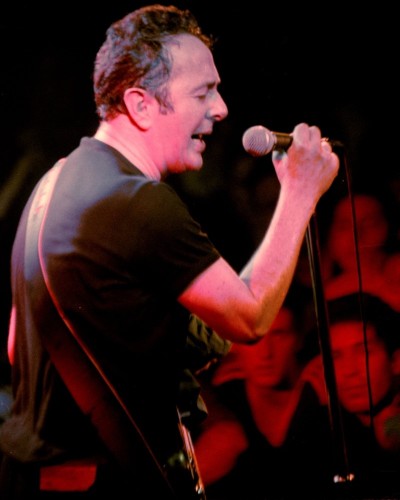 Joe Strummer was a British musician, singer, actor, and songwriter. He was the lead singer and the rhythm guitarist of punk band The Clash. Other members of the band included Topper Headon, Mick Jones, and Paul Simonon.

Joe was the son of Anna (Mackenzie) and Ronald Ralph Mellor. His father was born in Lucknow, India, and had English, Ashkenazi Jewish, Armenian, and at least 3/128th Indian, ancestry. His mother was born in Bonar Bridge, Scotland.

[Joe’s father] had been born in Lucknow on 8 December 1916… His father was Frederick Adolph Mellor, who had married Muriel St Editha Johannes; half-Armenian and half-English, she was a governess to a wealthy Indian family. There was a large population of Armenians in Lucknow. Frederick Adolph Mellor was one of five sons of Frederick William Mellor and Eugenie Daniels, [a German Jew], who had married during the Boer War when his father lived in East Budleigh in Devon… Muriel Johannes was one of three daughters of Agnes Eleanor Greenway and a Mr Johannes… After the early death of her Armenian father, Muriel’s mother Agnes remarried, to a Mr Spiers.

Joe was married to Lucinda Tait, until his death. He had two children with his former partner Gaby Salter.

Joe’s paternal grandmother was Muriel St. Editha Johannes (the daughter of John Joseph Jacob Johannes and Agnes Eleanor/Ellena Greenway). Muriel was born in Lucknow, India. John was the son of Joseph Johannes, and was likely of Armenian origin. Agnes was born in Bengal, India, the daughter of Thomas Samuel David Greenway and Amelia Maria Shearin. She was of at least part English ancestry. Joe’s great-great-great-great-grandmother, Rose Anne (Anderson) Greenway, was the daughter of a Muslim Indian mother, and of a father, Lt. Samuel Anderson, who was the son of a British East Indian officer and a Muslim Indian mother. Rose was killed in the Cawnpore Massacre, along with several members of her family. A court case after her death investigated whether her will was valid on the basis of her being raised as a Muslim, and having married and lived most of her life as a Christian.

Sources: Genealogies of Joe Strummer (focusing on his father’s side) – http://www.geni.com
https://www.wikitree.com