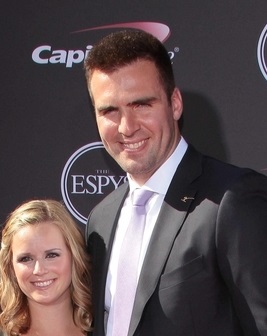 Ethnicity: Italian, as well as Irish and English, possibly other

Joe Flacco is an American football player. He is a quarterback for the Baltimore Ravens of the National Football League. He was voted Super Bowl MVP for Super Bowl XLVII (2013).

Joe is married to Dana Grady, with whom he has five children.

Joe’s paternal grandmother was Laura Wheeldon (the daughter of Isaac Wheeldon and Madeline “Mamie” Tartiglia). Isaac’s parents, John Wheeldon and Alice Ann Bentley, were English. Madeline was the daughter of Ernest A. Tartiglia, who was an Italian immigrant, and of Dominica “Mamie” Morris/Morse, who was born in Pennsylvania, to Italian parents.

Joe’s maternal grandfather is Tom Madden (the son of Thomas Michael Madden and Rose E. Del Duca). Joe’s grandfather Tom was a football quarterback. Joe’s great-grandfather Thomas M. Madden was a prominent judge, who was a Judge, Chief Judge, and Senior Judge, of the United States District Court for the District of New Jersey. He was the son of James G. Madden and Elizabeth M. Dolan, of Irish origin. Rose was born in New Jersey, and was the daughter of Italian parents, Domenico Del Duca, who was from Gangi, Sicily, and Antonietta Di Ielsi. 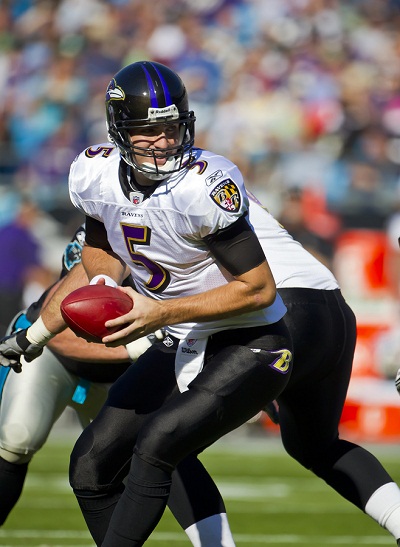 Flacco in 2010, photo by actionsports/Bigstock.com