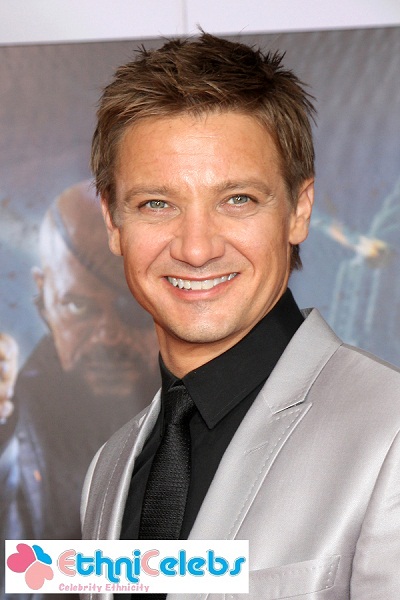 Renner in 2012, image via kathclick/bigstock.com

Jeremy Renner is an American actor, singer, and producer. He plays Hawkeye in the Marvel Cinematic Universe, and has also starred in The Hurt Locker, The Town, Dahmer, and American Hustle, among many other films.

Jeremy is the son of Valerie and Lee Renner. He has German, English, Swedish, Scottish, Irish, and Panamanian/Jamaican/African-Caribbean, and remote French, ancestry. His maternal grandmother was born in Panama, with roots in Jamaica, and was of at least part black ancestry. He has a daughter with his former wife, Canadian model Sonni Pacheco. A picture of Jeremy with his mother can be seen here.

Jeremy’s paternal grandfather was Oscar Harrison “Art” Renner (the son of Levi/Lee Renner and Lucy/Lucille Edna Horner). Oscar was born in New Jersey. Levi was the son of John F. Renner and Cecelia C. Godfrey. Lucy was the daughter of Charles H. Horner and Elizabeth Trainer.

Jeremy’s maternal grandmother was Eleanor Adele Warren, later Warnock (the daughter of Frank Warren and Mavis Eleanore/Eleanor Hawkins). Jeremy’s grandmother Eleanor was born in New York, to a father born in either New York City or Panama, and to a mother born in Colón, Panama. Jeremy’s great-grandfather Frank appears to have his “race” described as “Panama” in one record. Jeremy’s great-grandmother Mavis was the daughter of Frederick George Hawkins/Hawting and Alrilla/Alzilla Alice Davis, who were from Jamaica. The 1920 U.S. Census taken in Cristobal, Panama Canal Zone lists Mavis and her parents as “black.” Mavis re-married to Samuel A. Warnock.

Sources: Family history of Jeremy Renner (focusing mostly on his father’s side) – http://stanislausgenealogy.blogspot.ca

Genealogy of Jeremy Renner (focusing on his mother’s side) – http://worldconnect.rootsweb.ancestry.com