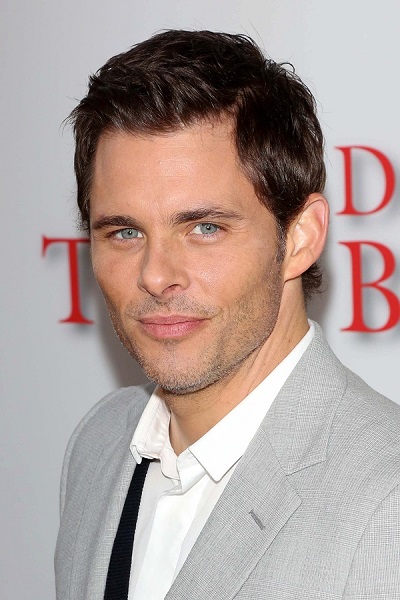 Marsden in 2013, photo by s_bukley/Bigstock.com

James Marsden is an American actor, singer, and Versace model. His roles include the X-Men and Sonic the Hedgehog films, as well as Disturbing Behavior, 10th & Wolf, Hairspray, Enchanted, 27 Dresses, Straw Dogs, The Best of Me, Anchorman 2: The Legend Continues, and Hop, and television’s Westworld, Dead to Me, and The Stand.

James is the son of Kathleen and James Luther Marsden, a professor of animal sciences. James has two children with his former wife Lisa Linde; and a son with his former partner, Brazilian model Rose Costa. Lisa’s father was country music songwriter Dennis Linde.

James’s patrilineal ancestry can be traced to George Marsden, who was born, c. 1808, in England.

James’s maternal grandfather is William George Scholz (the son of Adolph Henry Scholz and Lillie Elizabeth Foster). William was born in Texas. Adolph was born in Texas, to a father, William Guillermo Scholz, who was born in Mexico, to German parents (Adolph Sholz, from Brieg, and Pauline Algog), and to a mother, Eva Katherine/Kathryn Wolf, who was born in Pennsylvania, of German descent. Lillie was the daughter of Ephraim E. Foster and Alta McBride.

James’s maternal grandmother is Mary Louise Orr (the daughter of Jack C. Orr and Anita Louise/Lydia Conring). James’s grandmother Mary Louise was born in Texas. Anita was the daughter of Julius Conring, who was born in either Texas or Mexico, to German parents (Carl Heinrich Hermann Conring and Emma Benner), and of Anita M. Myrick, who was English.

Genealogy of James Marsden (focusing on his father’s side) – http://worldconnect.rootsweb.ancestry.com

Genealogy of James’s maternal great-grandfather, Adolph Henry Scholz (focusing on his own father’s side) – https://www.findagrave.com