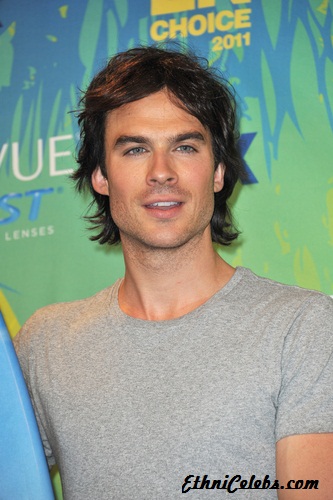 Ian Somerhalder is an American model, actor, activist, and director. He is known for starring on the series Lost and The Vampire Diaries, and in the films The Rules of Attraction and Pulse. Ian is married to actress and writer Nikki Reed, with whom he has a daughter.

Ian has English, one quarter Cajun French, as well as smaller amounts of Scots-Irish/Northern Irish, Scottish, and Welsh ancestry. Ian has said that the surname Somerhalder was that of his grandfather’s stepfather, Jacob Emile Somerhalder. Ian has said that his mother has Choctaw Native American ancestry. It is not clear if this Choctaw Native American ancestry has been verified/documented.

Ian’s paternal grandfather was named Robert Emile Somerhalder (the son of Nancy Eveline Wood and of a man whose surname was said to be Hull). According to Ian, his grandfather Robert received his surname from Jacob Emile Somerhalder, who was evidently his stepfather and not his biological father.

Ian’s paternal grandmother was Camellite/Carmel Blanchard (the daughter of Augustin/August “Gus” Blanchard and Jeanne Marguerite Guillot). Camellite was born in Louisiana, and was of Cajun (French) descent. Augustin was the son of Arthur Desire Blanchard and Cecile/Cecilia Celiana/Alice Templet. Jeanne was the daughter of Ursin Edouard Guillot and Julie Carmelite Girouard.

Ian’s maternal grandfather was Carlie Barton Israel, Sr. (the son of John Randolph Dowdy “Jack” Israel and Johnnie Victoria Brumfield). Carlie was born in Louisiana. John was the son of John Jacob Dowdy, who had changed his name to John Jacob Israel, while living in Arkansas, and of Rebecca Jane Vaughn. Johnnie was the daughter of James Wesley Brumfield and Mary Jane Allen.

Genealogy of Ian’s maternal great-grandmother, Pearline “Pearly” Rushing (focusing on her own father’s side) – http://worldconnect.rootsweb.ancestry.com

Genealogy of Ian’s matrilineal great-great-grandmother, Mary Elizabeth Breeland (focusing on her own father’s side) – http://worldconnect.rootsweb.ancestry.com