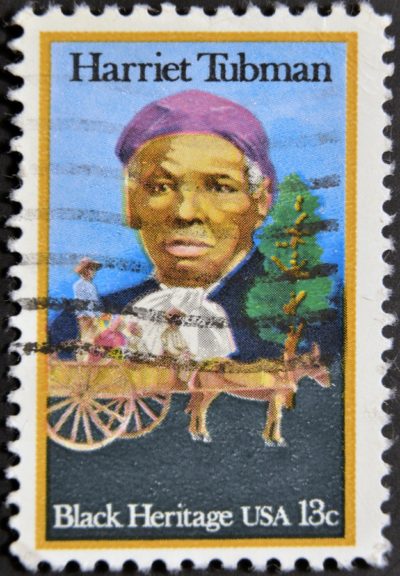 Harriet Tubman on a stamp printed c. 1996, photo by Neftali/Bigstock.com

Harriet Tubman was an American abolitionist, humanitarian, and political activist. She escaped slavery in 1849, and then helped free at least 70 slaves, using the Underground Railroad. Harriet was an armed scout and spy for the United States Army during the American Civil War, and later worked for women’s suffrage. She was the first woman to lead an armed expedition in the war. She was nicknamed “Minty” and “Moses.”

Harriet was born into slavery, the daughter of Harriet Greene and Ben Ross. She was married to Nelson Davis, until his death. They had a daughter, who was adopted. Her surname was from her first husband John Tubman.

Harriet’s paternal grandfather may have been named Martin Ross.

Harriet’s maternal grandmother was named Modesty Greene. Modesty was born in Africa, and was taken to the U.S. on a slave ship.

Harriet was told that she had roots from the Ashanti people, in what is now Ghana. It is not clear if this has been verified.