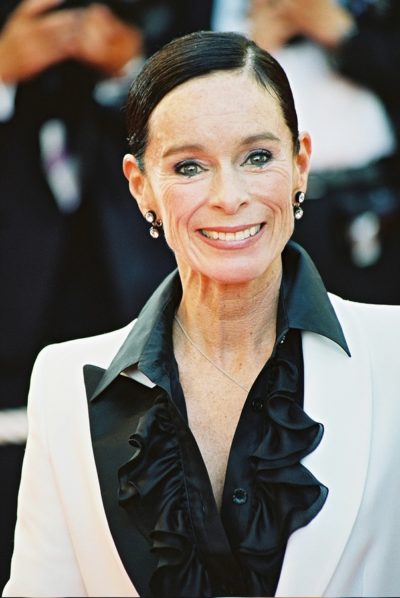 Chaplin in 2002, photo by Denis Makarenko/Bigstock.com

Geraldine is married to Chilean cinematographer Patricio Castilla. She has a son with her former partner, Spanish director Carlos Saura, and a daughter with Patricio, actress Oona Chaplin. Among her nieces and nephews are actors Dolores Chaplin, Carmen Chaplin, Kiera Chaplin, Orson Chaplin (who is also a rapper), and circus performer and actor James Thiérrée. Her half-brother was actor Sydney Chaplin.

Geraldine’s paternal grandfather was Charles Chaplin, a singer (the son of Spencer Chaplin and Ellen Elizabeth Smith). Charles was born in Marylebone, London, England. Spencer was the son of Shadrach Chaplin and Sophia Hancock. Ellen was the daughter of William Smith and Emma Bristo/Bristow.

Geraldine’s paternal grandmother was Hannah Harriet Pedlingham Hill, an actress and singer (the daughter of Charles Frederick Hill and Mary Ann Terry). Hannah was born in Newington, London, England. Geraldine’s great-grandfather Charles was the son of John Hill. Mary Ann was the daughter of John Terry and Mary Ann Lake. It appears that both John Hill and John Terry were born in Ireland.

Geraldine’s maternal grandmother was Agnes Boulton, a writer (born Agnes Ruby Boulton, the daughter of Edward William Boulton, an artist, and of Cecil/Cecille Maud/Maude Williams). Agnes was born in Chelsea, London, England. Edward was born in Philadelphia, Pennsylvania, to an English father, Edward W. Boulton, and to an American mother of Scottish descent, Barbara Elizabeth Stevenson. Cecil was the daughter of Robert M. Williams and Florence Emily Harper.

Geraldine’s father is often stated to have had some degree of Romani (Gypsy) ancestry. It does not appear that this ancestral claim has ever been verified/documented. Charlie was sometimes believed to have been Jewish (especially during his lifetime), but his parents were not of Jewish heritage.