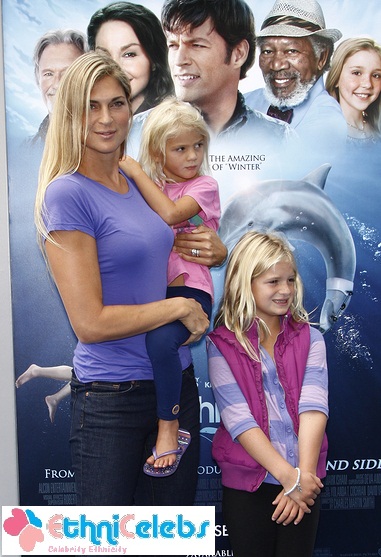 Reece in 2011, image via kathclick/Bigstock.com

She is the daughter of Terry (Glynn) and Robert Eduardo/Edward Reece. Her father was born in Port of Spain, Trinidad, and worked as a psychologist. Her mother is a white American. She was raised in Saint Thomas, U.S. Virgin Islands. Gabrielle is married to big-wave surfer Laird Hamilton, with whom she has two children.

A picture of Gabrielle’s father can be seen here.

…My grandfather was Black, and my grandmother was White. A lot of my family are still in Trinidad… Women of color can always tell [that Gabrielle has African ancestry]. They’re the ones who ask me.

Gabrielle’s paternal grandfather was Edward Albert Reece (the son of William Reece and Alice Huggins). Edward was born in Trinidad, and was black.

Gabrielle’s paternal grandmother was Winifred/Winnifrid/Winnifred Melissa Beal (the daughter of Arthur G. Beal and Lida Maud Mitchell). Winifred was born in Worcester, Worcester, Massachusetts. She was white. Arthur was the son of John Beal and Melissa Grant. Lida was the daughter of Charles Mitchell and Nellie Moore.