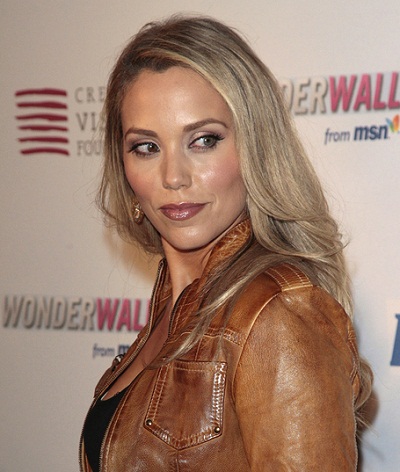 Berkley in 2009, photo by Joe Seer/Bigstock.com

Elizabeth Berkley is an American television, film, and theater actress, dancer, and model. Her most notable roles were in the television series Saved by the Bell, and the Paul Verhoeven film Showgirls. She is the daughter of Jere and Fred Berkley.

Her parents are both Jewish, of Russian Jewish, Polish Jewish, and Austrian Jewish descent. Elizabeth was raised in the Conservative denomination of Judaism, and was Bat Mitzvah. Elizabeth is married to actor Greg Lauren, who is the nephew of designer Ralph Lauren. The couple has a son.

Elizabeth’s maternal grandfather was Adolph Gottfurcht (the son of Joseph Gottfurcht and Ella Biederman). Adolph was born in Vienna, Austria, to a Polish Jewish father and an Austrian Jewish mother.

Elizabeth’s maternal grandmother was Ruth Levitt (the daughter of Alexander Lavitt and Anna Nachamowitz). Ruth was born in Michigan, to Russian Jewish parents.