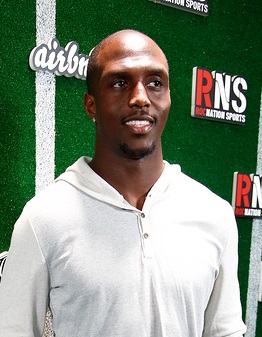 McCourty in 2014, pic by Debby Wong/Bigstock.com

Devin McCourty is an American football player. He is a free safety for the New England Patriots of the National Football League (NFL).

Devin is the son of Phyllis Harrell and Calvin McCourty. Both of his parents are/were African American. His identical twin brother, Jason McCourty, is also a football player. Devin is married to Michelle Powell, with whom he has two children. Devin is a Christian.

Devin’s maternal grandfather was Samuel Lee Harrell (the son of Benjamin Harrell and Emma Keeling). Samuel was born in Virginia.