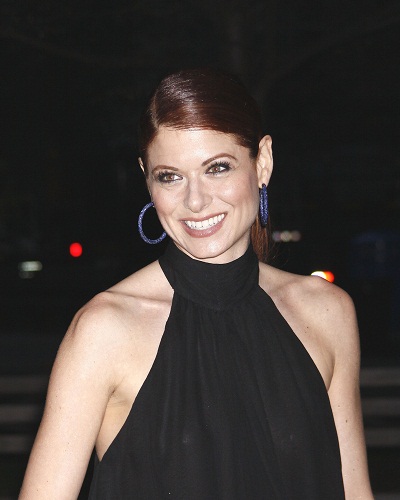 Messing in 2009, photo by PrPhotos.com

Debra Messing is an American actress.

Debra is the daughter of Sandra (Simons), who was a professional singer, and Brian Messing. Her parents are both Jewish (of Russian Jewish and Polish Jewish descent). Debra had a Bat Mitzvah ceremony at a Reform temple. She was raised in East Greenwich, Rhode Island, and was Rhode Island’s Junior Miss in 1986.

Debra has a son with her former husband, actor, screenwriter, producer, and director Daniel Zelman. Daniel is also Jewish.

Debra’s paternal grandfather was Morris/Moshe Messing (the son of Chaim/Hyman Messing and Esther/Ester Mitteldorf). Morris was a Polish Jewish emigrant, from Przeclaw. Chaim was the son of Yoel Messing and Alta Malka. Esther was the daughter of Baruch Mitteldorf/Miteldorf and Rivka/Rebeka Rozenberg.

Debra’s paternal grandmother was Millie Rothblatt/Rottblatt (the daughter of Isaac M. Rottblatt and Rebecca Leiter/Leter). Millie was born in London, England, to Jewish parents from Warsaw, Poland. Isaac was the son of Bernard Rottblitt and Molly Koplind.