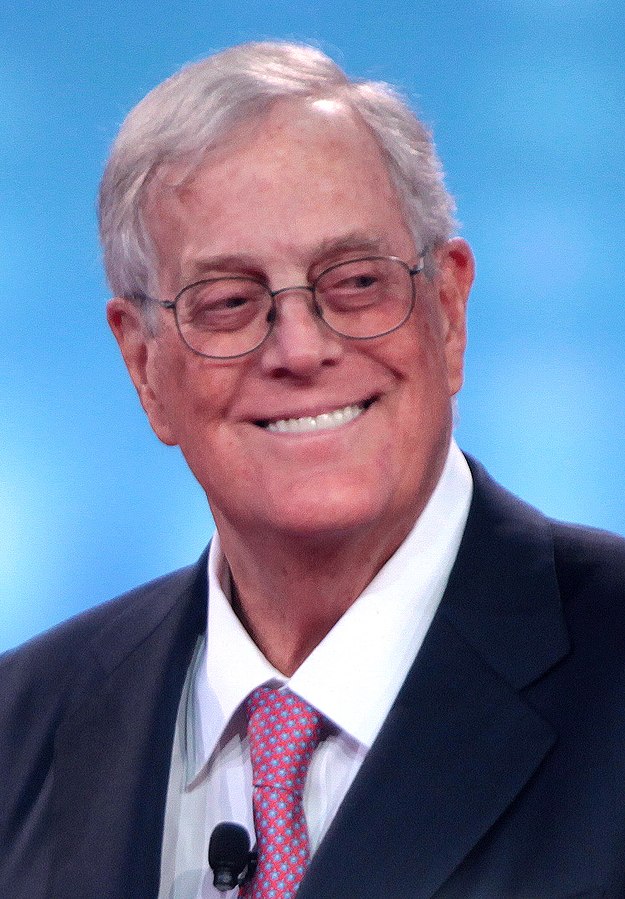 David Koch was an American businessperson, philanthropist, political activist, chemical engineer, and politician. He was usually ranked as one of the top 10 richest people in the U.S., and as of 2013, was the richest individual in New York City.

He was the Libertarian Party’s nominee for Vice President of the United States in 1980.

David was the son of Mary Clementine (Robinson) and Fred C. Koch (Fred Chase Koch). His father was a chemical engineer and businessperson who founded the company that later became Koch Industries, a multinational, of which David was co-owner and Executive VP. Koch was the second-largest privately held company in the United States.

David’s siblings are/were Frederick R. Koch (Frederick Robinson Koch), Charles Koch (Charles de Ganahl Koch), and a younger, twin brother, Bill Koch (William Ingraham Koch), all of whom have been involved in business. He was married to Julia Flesher, until his death. David had three children.

David’s ancestry was English, Dutch, German/Frisian, and Scottish. He had deep roots in the United States, going back to the 1600s.

David’s paternal grandfather was Harry Koch (born Hotze Koch, the son of Johan Anthon Koch and Gatske Hotzes/Hotses Jorritsma). Harry, a businessperson, was born in Workum, Nijefurd, Friesland, The Netherlands, of Frisian German and Dutch descent, and moved to the U.S. in 1888. He founded the newspaper Quanah Tribune-Chief, and was a founding shareholder in Quanah, Acme and Pacific Railway. Johan was the son of Johann Anthon Koch, who was born in Jever, Lower Saxony, Germany, and of Anna Sophia Schols. Gatske was the daughter of Hotse Jorrits Jorritsma and Akke Theodorius Ykema.

David’s maternal grandfather was Ernest Franklin Robinson (the son of David H. Robinson and Henrietta Philena Beach). Ernest was born in Kansas. David’s great-grandfather David was the son of Moses E. Robinson and Elizabeth Hamilton. Henrietta was the daughter of Isaac Closson Beach and Emily A. Wheeler.

David’s matrilineal line can be traced back to Hester Francis Trott, who was born, c. 1609, in London, England.