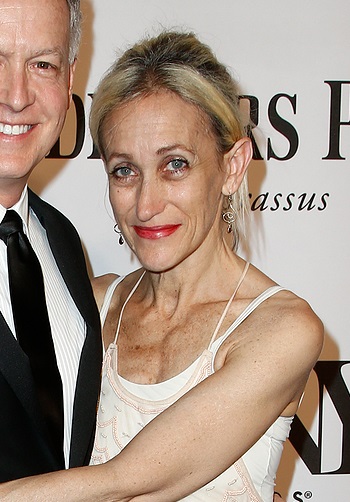 Shulman in 2014, photo by Debby Wong/Bigstock.com

Constance Shulman is an American actress. Her roles include the series Doug and Orange Is the New Black.

She is married to actor Reed Birney, with whom she has two children, actors Ephraim Birney and Gus Birney.

Constance’s paternal grandfather was named Charles Shulman. Charles was born in either Lithuania or Russia.

Constance’s paternal grandmother was named Sadie Lipner Shulman (the daughter of Max W. Lipner and Bertha). Sadie was born in New York, to Russian Jewish parents. She was the first female judge in the history of Massachusetts, alongside Emma Fall Schofield.

Constance’s maternal grandfather was Harry Bockstein (the son of Morris Bockstein and Sarah A. Rosenberg). Harry was born in New York, to Russian Jewish parents. Morris was the son of Samuel Bockstein and Becky/Beky Tatlebame. Sarah was the daughter of Naten Rosenberg and Brina.

Constance’s maternal grandmother was named Julia Horowitz (the daughter of George Horowitz and Rachel). Julia was born in Russia.