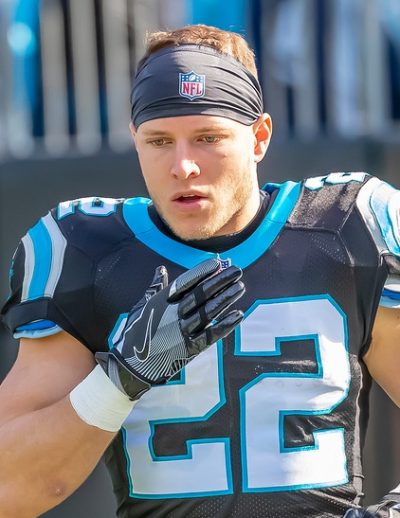 McCaffrey in 2018, photo by actionsports/Bigstock.com

Christian McCaffrey is an American football player. He is a running back and return specialist for the Carolina Panthers of the National Football League (NFL).

Christian’s maternal grandfather was Dave Sime (David William Sime, the son of Charles J. Sime and Evelyn M. Kohms/Kehms). Dave was born in New Jersey, and was a sprinter, multi-sport athlete at Duke University, and pioneering ophthalmologist. Charles was the son of a Scottish father, John M. Sime/Sine, and of an English mother, Ethel M. Kay. Evelyn was the daughter of Joseph Kohms, who was born in New York, and of Elisabeth/Lizetta/Lizzie M. Relka, who was born in New Jersey, both of them to German parents. Joseph had roots in Oetigheim and Weil.