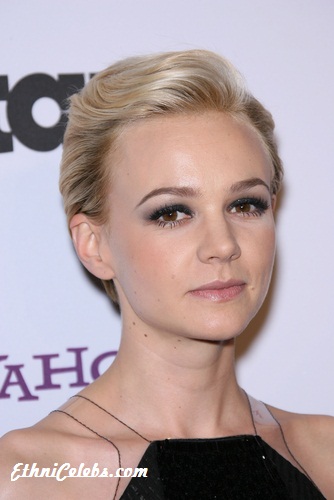 Mulligan in 2011, photo by s_bukley / Shutterstock.com

Carey Mulligan is a British actress and singer. Her roles include the films Pride & Prejudice, The Greatest, Brothers, An Education, Never Let Me Go, Drive, Shame, The Great Gatsby, Inside Llewyn Davis, Far from the Madding Crowd, Suffragette, Mudbound, Wildlife, Promising Young Woman, The Dig, and She Said, and television’s Bleak House, Northanger Abbey, and Collateral.

Carey is the daughter of Nano, a university lecturer, and Stephen Mulligan, a hotel manager. Her father is from Liverpool, and her mother is from Llandeilo, Wales.

Carey is married to musician Marcus Mumford, of the band Mumford & Sons. The couple has two children.

Carey’s maternal grandmother is named Margaret A. M. James (whose parents’ surnames were James and Morgan). Margaret was born in Llandovery, Carmarthenshire, Wales.

Genealogy of Carey Mulligan (focusing on her mother’s side) – https://www.geni.com