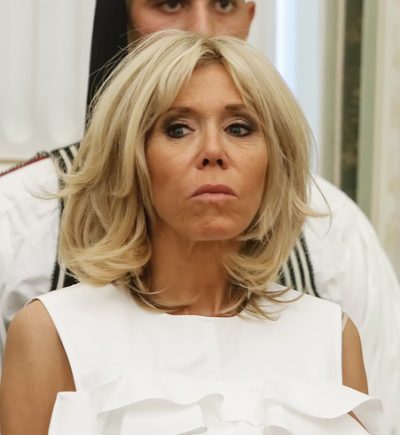 Athens, Greece – September 7, 2017: Brigitte Macron during a welcoming ceremony at the presidential palace in Athens as part of her and her husband’s two-day official visit to Greece, photo by vverve/Bigstock.com

Ethnicity: French, as well as some Catalan

Her father, Jean Georges Trogneux, was the owner of the Chocolaterie Trogneux, also from Amiens. Her mother, Simone Marie Madeleine (Pujol), was also born in Amiens. Brigitte is married to President of France, Emmanuel Macron. She has three children with her former husband, banker André-Louis Auzière.

Brigitte’s matrilineal ancestry can be traced to her third great-grandmother, Marie Geneviève Victoire Gérault (10 May, 1799, Lihons, Somme – 5 May, 1833, Lihons).

Genealogy of Brigitte Macron (focusing on her father’s side) – https://gw.geneanet.or