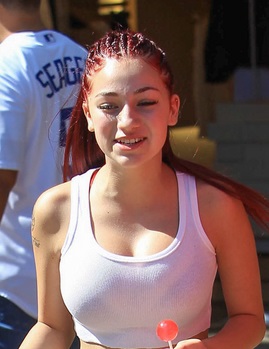 Bhad Bhabie, also known as the “cash me ousside” girl, is an American rapper, songwriter, and internet personality. She first made her fame appearing on the Dr. Phil talk show at the age of thirteen. She is the daughter of Barbara Bregoli and Ira Peskowitz, and was raised mainly by her mother. Her father is Ashkenazi Jewish. Her mother is of three quarters Italian, one eighth Irish, and one eighth Norwegian, descent.

Her name is pronounced “bad baby.”

Bhad’s paternal grandfather is Daniel M. Peskowitz (the son of Morris Peskowitz and Fanny Zweig). Daniel was born in New York, to Polish Jewish parents. Fanny was the daughter of Philip/Phillip Zweig and Esther Steier.

Bhad’s paternal grandmother is named Myra B. Fisher (the daughter of Yitzhak Fisher and Rachel). Myra was born in New York.