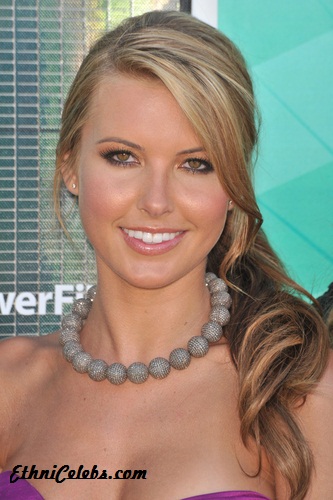 Patridge in 2009, photo by Featureflash / Shutterstock.com

Audrina Patridge is an American television personality, model, and actress. She is the daughter of daughter of Lynn and Mark Patridge. Audrina has a daughter with her former husband, Corey Bohan, a professional BMX dirt bike and motorcycle rider.

Audrina’s paternal grandfather is Max Ray Patridge (the son of Wilbur Elmer Patridge and Alice Rosemary Martin). Max has English, German, and Belgian ancestry. Wilbur was the son of Herbert Hiriam Patridge and Nellie Margaret Rowen. Alice was the daughter of William John Martin and Helene Lena Agnes Schmidt/Schmit, who was German.

Audrina’s paternal grandmother is Betty Lorraine Paye (the daughter of Horace Frank Paye and Hilda Marie Brodersen). Horace was the son of Jules/Jule Joseph Paye and Adele Petiniot, who were the children of Belgian immigrants; Jules had both Walloon and Flemish ancestry, while Adele had Walloon roots. Hilda had German ancestry, and was the daughter of Julius Carl Brodersen and Emma Louisa Bretthauer.

Sources: Genealogy of Audrina Patridge (focusing on her father’s side) – http://worldconnect.rootsweb.ancestry.com