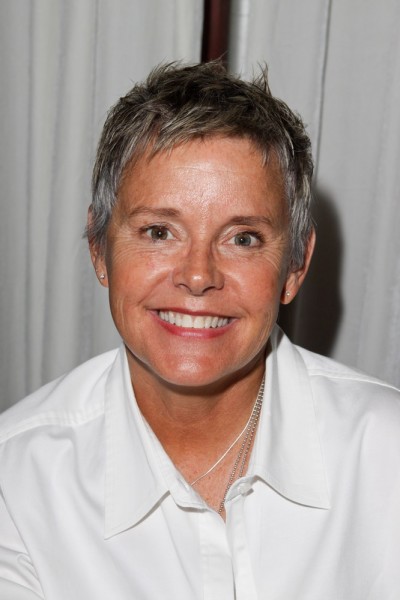 Bearse in 2012, photo by Prphotos.com

Amanda Bearse is an American actress, director, and comedian. She is known for her role as Marcy Rhoades/D’Arcy in the sitcom Married… with Children, and for starring in the 1985 film Fright Night.

Amanda is the daughter of Ann and Danforth Parker Bearse. She was raised in Atlanta, Georgia. Her parents, grandparents, and great-grandparents were all born in Georgia. Amanda is married to Carrie Schenken, and has a daughter.

Amanda’s paternal grandfather was Asa Taylor Bearse (the son of Asa Bearse and Minnie Smith). Amanda’s great-grandfather Asa was the son of Francis/Frank D. Bearse, whose mother was born in Halifax, Nova Scotia, Canada, and of Lucy Josephine Parker. Minnie was the daughter of James Washington Smith and Emily Harriett Wynne.

Amanda’s patrilineal line can be traced back to her eighth great-grandfather, Augustine Bearse/Austin Bearce. According to a tale written down by Franklin Bearce, Augustine was a Gypsy (Romani) who was deported from England to Massachusetts and married Mary “Little Dove” Hyanno, a Wampanoag Native American woman. Many people have questioned the credibility of Franklin and regard the tale as a legend. There is no proof, beside Franklin’s writing, that Augustine married a woman named Mary or a Native American woman. However, their son Joseph Bearse, Amanda’s ninth great-grandfather, was buried in a Native American cemetery, which might add credibility to the tale. It is also not clear whether Augustine was really of Romani descent.

The surname Wingo is likely to be an anglicized version of the French Huguenot surname Vigneron/Vigneau, meaning “winegrower.”