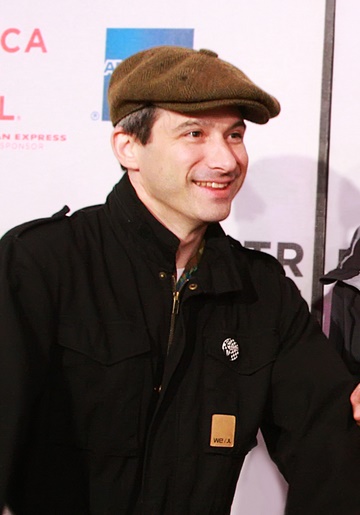 Ad-Rock, also known by his birth name Adam Horovitz, and as King Ad-Rock and Shadrach, is an American rapper, guitarist, and actor. He was a member of the hip hop group Beastie Boys, in which he played the guitar. Other members included Mike D and Adam Yauch.

Ad-Rock is the son of Doris (Keefe) and Israel Horovitz, a playwright, director, and actor. His sister is producer Rachael Horovitz. Ad-Rock is married to Kathleen Hanna.

His father was Jewish. His mother is of Irish Catholic background.

Ad-Rock’s paternal grandfather was Julius Charles Horovitz (the son of Israel Horovitz and Bessie S. Binsky). Julius was born in Massachusetts. According to census records, Israel and Bessie were born in Russia. Israel’s profile on geni.com says that he was born in Romania. Bessie was the daughter of Isaac Binsky and Sara.

Genealogy of Ad-Rock (focusing on his father’s side) – https://www.geni.com