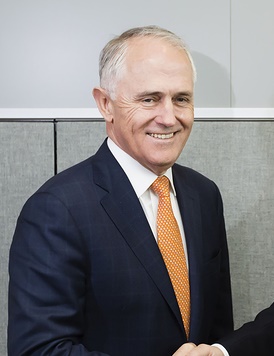 Turnbull in 2016, photo by palinchak/Bigstock.com

Prime Minister Turnbull is the son of Coral Lansbury (born Carol Magnolia Lansbury), an academic and writer, and Bruce Bligh Turnbull. He is married to businessperson, philanthropist, and politician Lucy (Hughes) Turnbull, with whom he has two children. Lucy was Lord Mayor of Sydney.

Prime Minister Turnbull’s maternal grandmother was May Morle (the daughter of William Bushby Morle and Alice Harriett/Harriet Hawes). May was born in Hendon, Greater London, England. William was the son of Thomas Busby Morle and Elizabeth. Alice was the daughter of John Stabsnal/Warmoll Hawes and Sarah Nichols or Morley.

My mother always used to say that her mother’s family was Jewish… Whether that’s true or not, I don’t know. She wasn’t always the most reliable source of information, I’m afraid. And she may not have been sure herself.

There is no particular evidence of Jewish forebears in the genealogy of Prime Minister Turnbull’s maternal grandmother, May Morle.