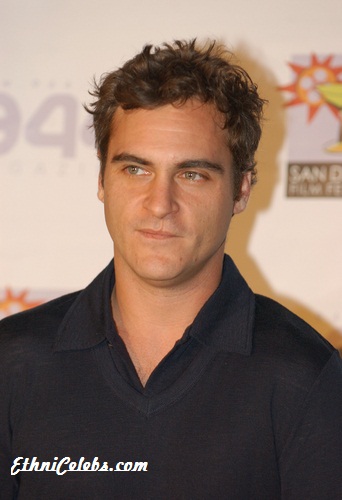 Joaquín Phoenix, previously also credited as Leaf Phoenix, is an American actor, musician, producer, music video director, and activist. He won the Academy Award for Best Actor for Joker (2019). He is also known for his roles in the films To Die For, Gladiator, and The Master, among many others.

Joaquín was born in San Juan, Puerto Rico, to parents from the continental United States. He is the son of John Phoenix (born Johnny Lee Bottom), from California, and Arlyn Phoenix (born Arlyn Dunetz), a social activist, from New York. Joaquín’s father is of English, along with Scottish, Scots-Irish/Northern Irish, German, Irish, Welsh, and French Huguenot, ancestry. Joaquín’s mother is Jewish; half of her family are Russian Jews and the other half are Hungarian Jews.

Joaquín is the brother of late actor River Phoenix, as well as actresses Rain Phoenix, Liberty Phoenix, and Summer Phoenix. Joaquín has a son with his fiancée, actress Rooney Mara.

He was raised in Florida and California. At one point, Joaquín’s parents joined the religious group Children of God, which they later left. Joaquín has said:

I’m Jewish… But I don’t think I’ve ever been very religious, no, though I do consider myself a spiritual person. I appreciate a lot of traditions from various faiths. I’m on a path.

Joaquín’s patrilineal line can be traced to John Bottom, who was born, c. 1598, in Archers Hoop, Malmsbury, England, and to his wife Elizabeth.

Joaquín’s paternal grandfather was Ehlia/Robert Merrill Bottom (the son of William Dell Bottom and Cordelia Pearl Matherly). Robert was born in Kentucky, as were all of his grandparents. William was the son of Fidellar/Phidellar Sharp “Dee” Bottom and Rachel Ann Bolling/Bowling. Cordelia was the daughter of David Houston Matherly and Sarah Frances “Sally” Purdom.

Joaquín’s maternal grandfather was Meyer Dunetz (the son of Samuel/Sam Dunetz and Libbe/Libby “Sallie” Grodenzik). Meyer was born in New York. Samuel and Libbe were Russian Jewish immigrants. Samuel was the son of Moses/Moshe Idel Dunetz and Shifra. Libbe was the daughter of Simon Gordon and Menucha.