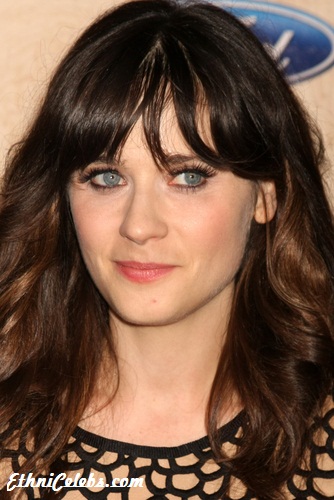 Zooey Deschanel is an American actress and musician. She is the daughter of Mary Jo Deschanel, an actress, and Caleb Deschanel, a cinematographer and director. Her sister is actress Emily Deschanel. Zooey has two children with her former husband, producer Jacob Pechenik.

Her father is of half French ancestry, with his other roots including English, German, Scots-Irish/Northern Irish, and distant Cornish. Her mother’s ancestry includes English, Irish, Northern Irish/Scots-Irish, French, Swiss, and Dutch.

Zooey’s father is a Quaker and her mother is Catholic. Zooey was raised in what she has described as a “you can be whatever you want” way. In 2015, US Magazine reported that Zooey has converted to Judaism (her then-husband Jacob’s religion).

Zooey’s paternal grandfather was Paul Jules Deschanel (the son of Joseph Marcelin Eugène Deschanel and Marie Josephine Favre). Paul was born in Oullins, Rhône, France, and moved to the United States in 1930. Joseph was the son of Jean Joseph Deschanel and Eugenie Michelle Amyot.

Zooey’s maternal grandfather was Donald Lamar Weir (the son of Ralph Harrison Weir and Helen Mary Ellen Lamar). Donald was born in Ohio. Ralph was the son of Addison Mohallan Weir, whose father was born in Lifford, Donegal, Ireland, and of Elizabeth Emilie Lanie Gurney, whose father was from Belfort, France, and whose mother was from Bern, Switzerland. Helen was the daughter of Henry Anson Lamar, Jr. and Mary B. Sullivan.

Genealogy of Zooey Deschanel (focusing on her father’s side) – http://worldconnect.rootsweb.ancestry.com

Genealogy of Zooey’s paternal grandmother, Anna/Ann Ward (Orr) Deschanel (focusing on her own father’s side) – https://www.findagrave.com