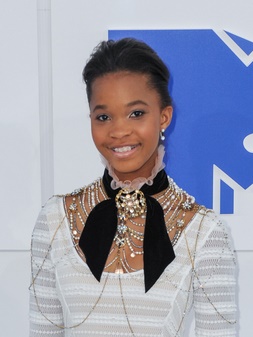 Wallis in 2016, photo by Prphotos.com

Quvenzhané Wallis is an American actress and author. She is the first, and thus far only, person born in the 21st century to have been nominated for an Academy Award for acting (with her nomination for Best Actress for the 2012 film Beasts of the Southern Wild). She has also starred in the film Annie (2014), and appeared in 12 Years a Slave, Fathers and Daughters, Trolls, and Swagger.

Quvenzhané is the daughter of Qulyndreia and Venjie Wallis. Her name Quvenzhané combines the first syllables of her parents’ first names, Quven, and then an alteration of the Swahili word jinni, meaning “sprite” or “fairy.”

Quvenzhané’s paternal grandfather was Kenneth “Lloyd” Celestine (the son of Benjamin Stoves and Otis Celestine). Benjamin was the son of James Stoves and Edna. Otis was the daughter of Clendy/Clensy/Clenzy/Clancy Celestin and Ellen Watson.