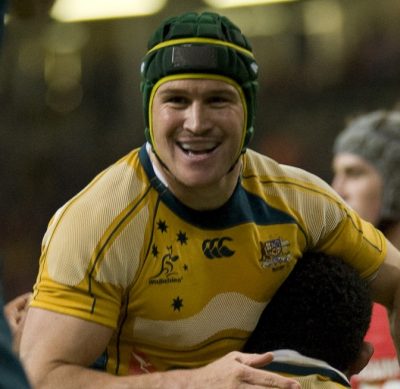 Giteau in 2009, photo by sportsphotographer.eu/www.bigstockphoto.com

Matt Giteau is an Australian rugby union player. He has played 103 Test Matches for his country, scoring 698 points.

Matt is the son of Julie and Ronald “Ron” Giteau, a professional rugby league footballer. His sister, Kristy Giteau, is a dual-code rugby international for Australia.

Matt is married to Bianca Giteau (née Franklin), an Australian netball player, with whom he has two children. Bianca is part Indigenous Australian (Noongar). She is the sister of Australian rules player Lance “Buddy” Franklin.

Matt’s surname is from his great-grandfather, who moved from Southern France to Australia. He has also stated  that he has Welsh ancestry.