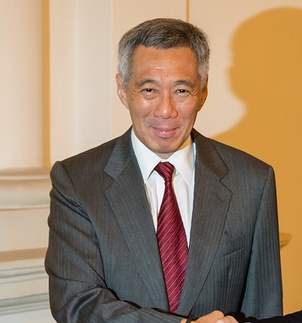 Lee in 2014, photo by palinchak/Bigstock.com

Lee Hsien Loong is a Singaporean politician. He is the third Prime Minister of Singapore, having served in the position, since 12 August, 2004. He has also been the 3rd Secretary-General of the People’s Action Party, from 3 December, 2003, and Minister for Finance, from 10 November, 2001 to 1 December, 2007, among other duties.

His father, Lee Kuan Yew, was the first Prime Minister of Singapore, from 3 June, 1959 to 28 November, 1990. His mother was Kwa Geok Choo. He is married to Ho Ching. He was previously married to Wong Ming Yang, until her death. He has two children with Wong and two children with Ho.

Lee Hsien Loong’s patrilineal ancestry can be traced back to his 26th great-grandfather, Lee Huo De.