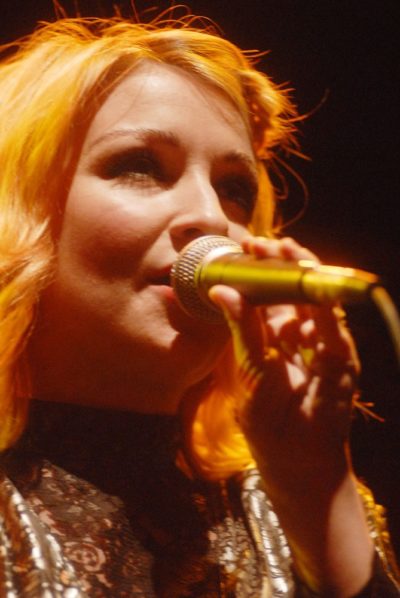 Miller-Heidke in 2010, pic by Prphotos

Kate Miller-Heidke is an Australian singer, songwriter, and actress. She represented Australia in the Eurovision Song Contest 2019. She is the daughter of Jennifer Margaret “Jenny” Miller and Gregory Edward “Greg” Heidke.

Kate is married to musician Keir Nuttall, with whom she has a son.

Kate’s paternal grandfather was Edward Thomas Heidke (the son of Charles William Ernest Heidke and Florence Elice Neumann). Edward was born in Atherton, Tablelands Regional, Queensland, Australia. Charles was the son of German emigrants, Carl August Heidke, of Deutsch Krone, Prussia (now Wałcz, West Pomeranian Voivodeship, Poland), and of Anne Buchbach, of Schleswig-Holstein, whose own mother, Anna Asmusdotter/Asmusson (or Asmussen in Danish), was Swedish. Florence was the daughter of a German emigrant, Rudolph Henry Neumann, of Naramowice (now in Greater Poland Voivodeship, Poland), and of an English emigrant, Mary Ann Doherty, of Preston, Lancashire and was of Irish descent.

Kate’s paternal grandmother was Gloria Mae Tatnell (the son of Joshua William Tatnell and May Parker). Gloria was born in Nambour, Sunshine Coast Regional, Queensland, Australia. Joshua was the son of Joshua Turner Tatnell, whose own parents, Robert Tatnell and Catherine Gallagher, were American and Irish emigrants, respectively, the aforementioned from New York, and of Mary Elizabeth Perrin, whose own parents were English. May was the daughter of an English emigrant, William Parker, of Bramham, Yorkshire (now West Yorkshire), and of Annie Jane Murray, who was also of English descent. Annie’s maternal grandparents, James Hall and Mary Ann Chandler, were convicted of theft, and were sentenced to transportation. The surname Murray is likely of Scottish origin.

Sources: Genealogy of Kate Miller-Heidke (focusing on her mother’s side) – https://www.geni.com