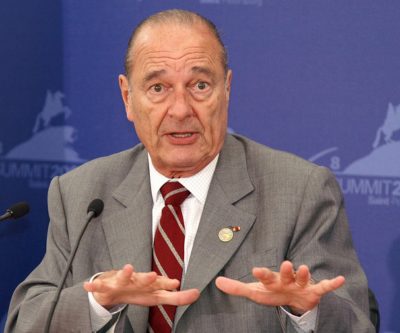 Chirac in 2006, photo by bankphoto/Bigstock.com

President Chirac was the son of Marie Louise (Valette) and Abel François Chirac. He was married to politician Bernadette Chirac, until his death. The couple has three children, including a Vietnamese-born foster daughter Anh Dao Traxel. He was also President of the Corrèze General Council, from 15 March, 1970 to 25 March, 1979, Minister of the Interior, from 27 February, 1974 to 28 May, 1974, President of Rally for the Republic, from 5 December, 1976 to 4 November, 1994, and Mayor of Paris, from 20 March, 1977 to 16 May, 1995; among other duties.

President Chirac’s paternal grandfather was Louis Joseph Chirac (the son of François Chirac and Anna Moulet). Louis was born in Beaulieu-sur-Dordogne, Limousin. François was the son of Louis Chirac and Martiale Fage. Anna was the daughter of Pierre Moulet and Marie Craygues.

President Chirac’s maternal grandmother was Victorine Mouly (the daughter of Jean Mouly and Anne Lacour). Victorine was born in Sainte-Féréole, Limousin. Jean was the son of Pierre Mouly and Françoise Marty. Anne was the daughter of Pierre Lacour and Marguerite Bessat.