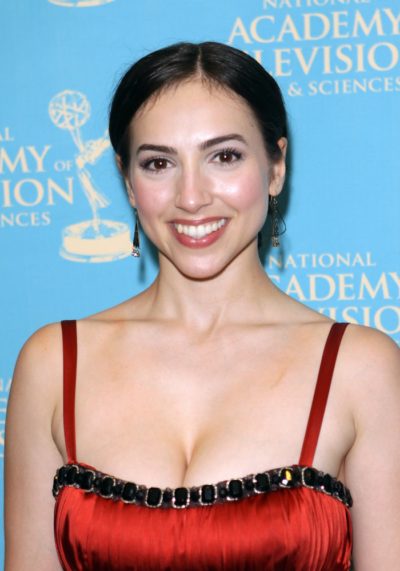 Eden Riegel is an American actress.

Eden is the daughter of Lenore and Kurt Riegel. She has a brother, Sam Riegel, a voice actor, and a half-sister, Tatiana S. Riegel, a film editor.

Eden is married to Canadian actor Andrew Miller, with whom she has two children.

Eden’s paternal grandfather was Oscar Wetherhold “Tom” Riegel (the son of Lewis Edgar Riegel and Florence Emma Wetherhold). Oscar was born in Pennsylvania. Lewis was the son of John Riegel and Rebecca. Florence was the daughter of Oscar B. Wetherhold and M. Alice Reinweld.

Eden’s maternal grandfather was named Joseph Engelmann. Joseph appears to have been a Hungarian Jew.

Eden’s maternal grandmother was Iris Irmgard Salomon (the daughter of Maximus “Max” Salomon/Solomon and Bertha Mayer/Meyer). Iris was born in Budingen, Germany, and moved to the U.S. because of the Nazi regime. Bertha was the daughter of Louis Meyer and Rosa Katzauer.

Genealogy of Eden Riegel (focusing on her mother’s side) – http://www.geni.com