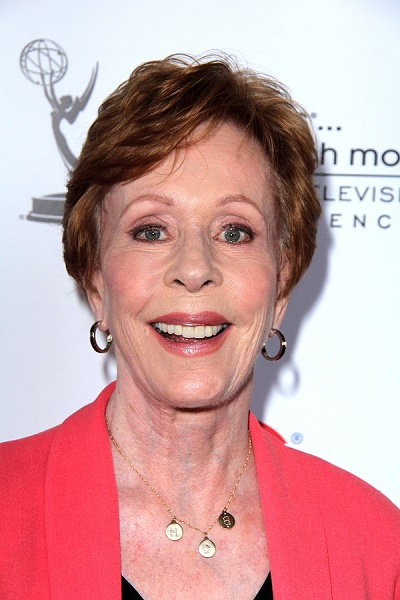 Burnett in 2013, photo by s_bukley/Bigstock.com

Ethnicity: English, some Irish and Scottish, distant Dutch and Welsh

Carol Burnett is an American actress, comedian, singer, and writer. She is known for starring on The Carol Burnett Show, and for her roles in the films Pete ‘n’ Tillie, The Front Page, The Four Seasons, Annie, Noises Off, and Horton Hears a Who!

Carol is the daughter of Ina Louise (Creighton), a publicity writer for film studios, and Joseph Thomas “Jody” Burnett, a film theatre manager. She was raised by her maternal grandmother, “Nanny,” in Los Angeles, California. Carol is married to drummer and contractor Brian Miller. She has three children with her former husband, television producer Joe Hamilton.

A DNA test whose results were displayed on the show Finding Your Roots with Henry Louis Gates, Jr. (2023) stated that Carol’s genetic ancestry consists of:

Genetically, she was found to have a common ancestor with actor and comedian Bill Hader.

Carol’s paternal grandfather was Joseph Hiram “Joe” Burnett (the son of John Henry “Jack” Burnett and Mahala Matilda Davis). Joseph was born in Texas. John was born in New York, the son of James H. Burnett and Margaret Burgett. He moved to Texas, where he later fought for the Confederacy, before deserting. Mahala was the daughter of James Davis.

Carol’s paternal grandmother was Nora Belle Potter (the daughter of Drury/Drewey Dobbins Potter and Martha Lucinda “Mattie” Love). Nora was born in Texas. Drewey was the son of Richard Marion Potter and Nancy Dobbins. Martha was the daughter of James E. Love and Nancy Hallmark.