Newton in 2012, photo by Prphotos.com

Cam Newton is an American professional football player. He is a quarterback.

Cam is the son of African-American parents, Jackie and Cecil Newton, Sr. His father was cut as a safety from the pre-season rosters of the 1983 Dallas Cowboys and the 1984 Buffalo Bills. His brothers are footballer players Cecil Newton and Caylin Newton. Cam is a devout Christian.

Cam has four children with his partner Kia Proctor.

Cam’s maternal grandfather was Talmadge/Talmage Wilder (the son of Priestley S. Wilder and Cornelia Kennety). Talmadge was born in Georgia. Priestley was the son of Franklin Wilder and Binah/Binaka/Biner Stephens. 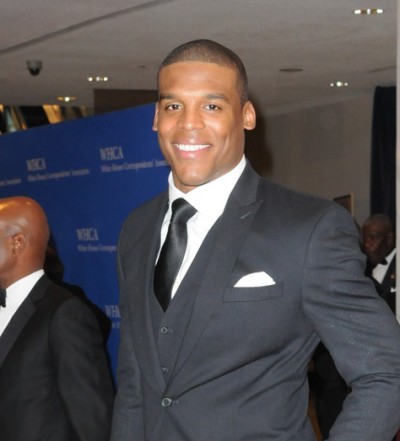 Newton in 2014, photo by Prphotos.com