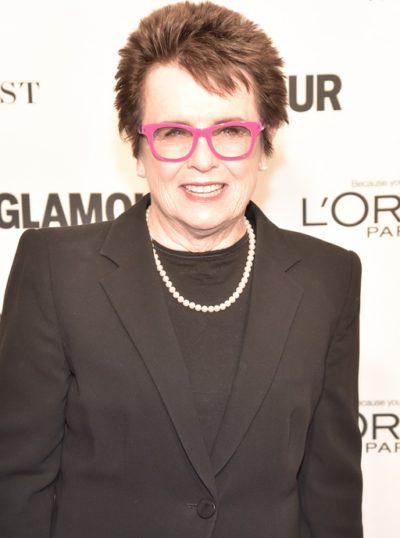 Billie Jean King is an American professional tennis player, formerly World No. 1 in her field. She is the daughter of Mildred Rose (Jerman) and Willis Jefferson Moffitt. Her brother is Major League Baseball pitcher Randy Moffitt. Her surname is from her former husband, tennis player Larry King.

“The American Woman” won Time Magazine’s Person of the Year for 1975. Billie Jean was one of twelve women chosen to represent that title on the magazine’s cover.

Billie Jean’s maternal grandfather was Roscoe William “Rocky” Jerman (the son of William David Jerman and Elizabeth/Lizzie May Luce). Roscoe was born in Pennsylvania. William was the son of Thomas Jerman, who was born in Ireland, and of Kathryn/Catherine L. McTigue, who was born in England. Elizabeth was the daughter of Shubael Luse and Ida A. Johnston.

A DNA test whose results were displayed on the show Finding Your Roots with Henry Louis Gates, Jr. (2014) stated that Billie Jean’s genetic ancestry is:

Billie Jean has sometimes been said to have Native American ancestry. This is not accurate.

Tags: EnglishIrishScottishtennisTime Person of the Year