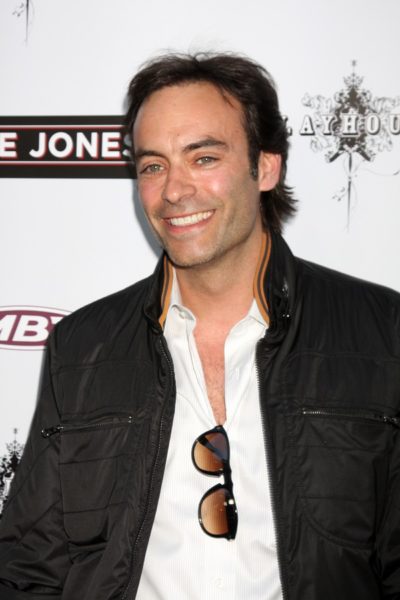 Delon in 2010, photo by Joe Seer/Bigstock.com

Anthony Delon is an American-born French actor. He was born in Beverly Hills, Los Angeles, California, the son of actor and businessperson Alain Delon and actress Nathalie Delon (born Francine Canovas). They are pictured here.

His father was born in Sceaux, France, of French, Corsican Italian, and German/Swiss-German descent. His mother was born in Oujda, Morocco. She had Spanish ancestry. People of French and other European ancestry who lived in French North Africa were known as Pied-Noir (literally Black Feet).

Anthony is married to Sophie Clerico. His daughter is model and actress Alyson Le Borges.

Anthony’s paternal grandfather was François Fabien Delon (the son of Jean Marcel Delon and Marie-Antoinette Evangelista). François was born in Craponne-sur-Arzon, 43080, Haute Loire, Auvergne, France. Jean was of French descent, the son of Fabien Delon and Marianne Adélaïde Delon. Anthony’s great-grandmother Marie-Antoinette was of Corsican Italian background, from Prunelli-di-Fiumorbo, and was the daughter of François Evangelista and Lucie Romani.

Anthony’s paternal grandmother was Édith Marie Suzanne Arnold (the daughter of Alfred Louis Arnold and Maria Minard). Alfred was of mostly German and Swiss-German, and some French, origin, and was the son of Jost Aloïs Arnold, whose family was from Altdorf, Uri, Switzerland, and of Odile Marie Adèle Liennemann. Anthony’s great-grandmother Maria was the daughter of Louis Minard and Marie Louise Amélie Le Gal.

Genealogy of Anthony’s paternal grandfather, François Fabien Delon (focusing on his own father’s side) – http://gw.geneanet.org