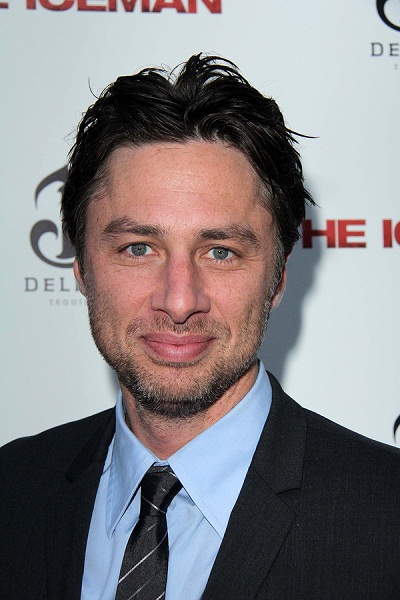 Braff in 2013, photo by kathclick/Bigstock.com

Zach Braff is an American actor, director, producer, and screenwriter. He is known for playing the lead, Dr. John Dorian, on the series Scrubs.

Zach is a the son of Anne, a clinical psychologist, and Hal Braff, a trial attorney. His siblings are writers Adam J. Braff and Joshua Braff. His step-sister is stand-up comedian Jessica Kirson, as his father married her mother.

Zach’s father was from a Jewish family that immigrated from Austria and Russia. Zach’s mother is of English, Irish, and Scottish, descent; much of her genealogy traces back to Colonial America of the 1600s, in New England. Zach’s mother converted to Judaism when marrying Zach’s father (Zach’s mother likely had an Orthodox or Conservative conversion). Zach had a Bar Mitzvah ceremony in a Conservative synagogue.

Zach’s paternal grandmother was Lee Tanner (the daughter of Louis Taner/Tanner and Sarah Herman). Lee was born in Connecticut, to Russian Jewish parents.

Zach’s maternal grandfather was Howard Arthur Maynard (the son of Fredrick A. Maynard and Elizabeth/Eliza/Lila A. Clowes/Clewes). Howard was born in Cranston, Providence, Rhode Island. Elizabeth was the daughter of William Alfred Clowes, who was Irish, and of Eliza Amelia Lindsay, whose parents were Scottish.

Through Zach’s mother, Zach is a descendant of Rebecca Towne Nurse (1621-1692), one of the women falsely accused of witchcraft and hung because of this, at Salem, Massachusetts. Zach is a ninth cousin of politician Mitt Romney. Both Zach and Mitt are the eight times great-grandchildren of Rebecca Towne, and of her husband, Francis Nurse.